Tartan Day saw a day out together for the entire Mascot team! BeBe strutted around feeling all pretty in her costume, and was admired by many, then spent the day being patted by so many people. Lucy worked a treat, and was as cute as usual! Baby Bonnie came on, and put smiles on many faces with her size, and her performance - she's going to be very good! Then, on came Darcy, who performed beautifully, and was absolutely faultless! Today was a huge day for Darcy, as, later in the day, he was announced as our new "Lead Mascot", as his grandmother handed her duties down to him. Congratulations to you Darcy - you have worked very hard to get to this point, and you thoroughly deserve the "Lead Mascot" position! Today was an extremely sad day for us! Since Ormiston House, our decision to retire our beautiful Audrey has been forced into making today Audrey's "farewell"! Her health deteriorated quickly following her May appearance, and we knew we had to make the most painful decision ever - Audrey needs to be allowed to go to sleep with dignity! Today at Tartan Day, a special segment was set aside for "Audrey's farewell"! Two pipers from Rocksberg/Moorina Rural Fire Brigade Pipes and Drums were there to pipe Audrey in with Scotland the Brave. I then struggled to let the crowd know that their very favourite Mascot was gravely ill, and that we were saying goodbye to her the following day. As Audrey was too unwell to do her trademark wave to the crowd, I took her to each side, and waved for her, then we presented margaret Campbell with a lovely framed photo of Audrey at tartan Day, in happier times. While we did this, our pipers played Amazing Grace! Then we turned around, I picked Audrey up, and carried her our behind our pipers as they played Shosanna's Lullaby! As we left, I had Margaret Campbell and Kathleen Proctor-Moore either side of me for support, and I cuddled our little Audrey so close and sobbed my heart out as we left - such an incredibly sad day!!! Many people came to us after that, and just wanted to touch Audrey, and say goodbye to her! Our heartfelt thankyou to Kirk James and Keiran McGill for giving Audrey the most beautiful, and dignified farewell we could have ever wished for her! And so, Darcy was later introduced to the crowd as our new, and very capable, "Lead Mascot"! Congrat's to you, our wonderful Darcy!! 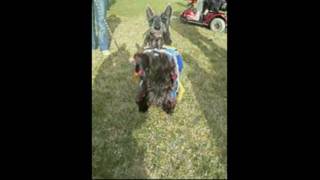 An early video of my Audrey

Lilly is having Puppies!

An early video of my Audrey

Off to the USA again